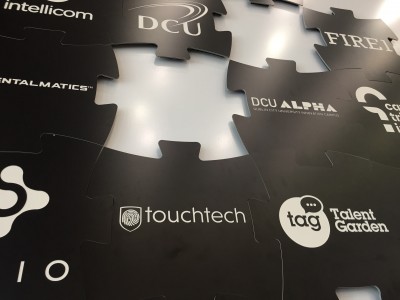 Touchtech, a startup that emerged from DCU’s student entrepreneurship programme, UStart, and which was scaled up at the DCU Alpha Campus in Glasnevin has been acquired by online payments giant Stripe.

Stripe, which was founded by Limerick brothers John and Patrick Collison, is valued at over €20 billion and is regarded as the fastest growing online payments company in the world.

Touchtech Payments Ltd. was established in 2014, while co-founder Shekinah Adewumi was studying Mechatronic Engineering at DCU. It was one of the first financial technology companies in Europe to develop a solution that uses biometric scanning to authenticate online payments.

It also became the first Irish company to offer a MasterCard and Visa certified payment authentication system using fingerprinting in 2015.

The company, currently headquartered at DCU Alpha, is to relocate its operations into the Stripe HQ building on Grand Canal Street. DCU Alpha, now home to 70+ companies and over 700 employees, has supported the company’s growth in Glasnevin with access to talent and research networks since 2016.

During 2015, the company was accelerated in UStart, DCU’s student entrepreneur programme delivered by the DCU Ryan Academy for Entrepreneurs.

The four-month programme is open to all DCU students and, in addition to €5,000 in seed capital, it provides participants with mentoring, networking opportunities within the start-up community, and the opportunity to pitch to potential investors.

Shekinah, a second year Mechatronic Engineering student at the time, was the team’s lead applicant to the programme and co-founder of Touchtech, along with a friend who was studying in TCD.

The exit is one of the largest achieved through any Irish accelerator programme. DCU Alpha itself is currently home to, or birthplace of, a series of companies that raised nearly €150m in 2018, including Fire1, Sublimity Therapeutics and UrbanVolt.

DCU Alpha companies were responsible for approximately 15% of all venture capital raised in Ireland last year.

“The acquisition of Touchtech by one of the world’s leading fintech companies is a welcome endorsement of the innovative technologies developed by the Touchtech team.

The Touchtech story shows how DCU’s support for student entrepreneurship enables new ideas to develop and flourish. In this way, the creativity of students can be translated into economic and societal benefits and the students themselves benefit hugely from the experience.”

“We are thrilled to see one of our companies being acquired by Stripe. Throughout their time based in DCU Alpha, we have supported and facilitated the Touchtech team, in terms of both hard and soft supports.

Having an indigenous startup being born in DCU and then being successfully scaled up in DCU Alpha, is a vindication of the innovation campus model that we rolled out in 2014, with support from Enterprise Ireland and the Department of Business, Enterprise & Innovation.”

“I want to congratulate the Touchtech Team for their achievements to date and the future success that Touchtech will have with Stripe.

The cooperation with DCU Alpha was instrumental in developing Touchtech to the levels needed to open this specialized market.”

We use cookies to ensure that we give you the best experience on our website. If you continue to use this site we will assume that you are happy with it.OkRead more